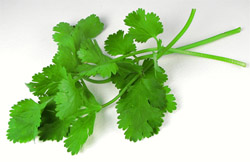 I don’t hate cilantro lovers, I just don’t like cilantro. In fact, I’m downright envious that I can’t enjoy whatever it is that everyone raves about. My tastebuds translate the herb into soap or dishwater. So I was both vindicated and excited to enjoy this exchange between Julia Child and Larry King back in 2002.

CHILD: I don’t like cilantro.
KING: What is that?
CHILD: It’s an herb that it has a kind of a taste that I don’t like.
KING: Is there an everyday food you hate, like broccoli?
CHILD: No, I don’t think so. I mean, if it’s properly cooked and properly served, I can’t think of anything I hate.
KING: So you’ll eat…
CHILD: Except cilantro and arugula I don’t like at all.
KING: Arugula?
CHILD: They’re both green herbs, they have kind of a dead taste to me.
KING: So you would never order it.
CHILD: Never, I would pick it out if I saw it and throw it on the floor.

Don’t hate me, pity me the chemical imbalance that causes it.  I hate cilantro, but it’s not my fault.

This entry was posted in Food and Wine, Love and Lust. Bookmark the permalink.