It’s hard to imagine that first pre-Little Feat meeting between Bill Payne and Lowell George. The one in 1969 that would start with trading “musical quotes,” Lowell on acoustic guitar and Bill on a spinet belonging to Lowell’s mother.  A meeting that fell into place by Bill Payne’s own desire and drive, literally south from Santa Barbara to LA several times, hoping to find a musical home with Frank Zappa and The Mothers of Invention. But it didn’t happen quite like that. Instead Little Feat was born and Zappa helped them get their first record contract with Warner Bros. When not playing with the current incarnation of Little Feat, keyboardist Payne, the only surviving original member, is so respected in the music world that he’s in heavy request as a session player performing on albums with Linda Ronstadt, James Taylor, Bonnie Raitt, The Doobie Brothers, Bob Seger, J.J. Cale, Jimmy Buffet, and so on.

Payne is one of those rare individuals blessed with natural talents that go beyond keyboards and songwriting. Picking up a camera from his son Evan only a few years ago, his immediate kinship with the lens exposed an eye that is a natural extension of his belief in discovering the connections between things.  In his own words:  “I don’t separate myself from my art. It is a revolving summation and continuance of what I am, what I was, and what I hope to be.”  And he’s also laid-back, extraordinarily collaborative, and intensely passionate about whatever he happens to be doing at the moment.  Which in this case is one of his most recent projects – Tracing Footsteps: A Journal of Home and the Road that combines stories, with multi-media showcasing his own photography, along with an audience Q&A.  Accompanying Payne to flesh out this powerful duo is Gabe Ford, current Little Feat drummer.

“Tracing Footsteps,” according to Payne, “is the way I describe my journey in photography. It houses my philosophy of combining a host of influences: black & white, color, textured themes, landscape, people, photojournalism — my time travel, literally–all under one roof.”

The primary architect behind the Little Feat “Grassroots” movement, Payne instinctively recognized the synergistic benefit of personally involving the band’s massive and hugely dedicated fan base in the job of promoting the band, upcoming shows, recordings, merchandise, etc as well as populating the online music communities … there are about a half dozen “working fans”  in NC alone. They’re like Deadheads, only with Feat. What stands out above all else is the connection (there’s that word again), fierce loyalty, and admiration between the band and their fans who would do anything, including buying groceries, gassing up the truck, or simply running a not-so-glamorous errand. Just ask one of those NC-based fans – Gene Morgan, who lives in Clayton – if you can find him when he’s not busy running around putting up posters as I suspect he’s doing right now in advance of this show.Good man that he is, Bill Payne took time out to talk with me about Little Feat, cameras, Inara George (Lowell’s daughter), movements (both musical and grassroots) and to answer a handful of crowd-sourced questions from fans.  Read the rest of the Q&A online HERE.
_____________________________________________________________

An outpatient of love
Still a work in progress.  Tender days. Weepy nights. Chocolate does NOT cure everything. Neither does bacon.  Not even chocolate-dipped bacon.

Where’s Mr. Right Now when you need him?

Posted in A-Musings, Love and Lust, Music (re: the Food of Love)

Little Feat + noise makers + plus music to conga by, with and to

Little Feat at the Cradle

Wowie zowie, what a show! It was a night full of signs and magic and meant-to-be’s.  Finney and I were running late and I wasn’t looking forward to driving all over Carrboro looking for parking. But we drove through the lot just in case and there was a spot right in front of the door, almost as if it had been waiting for us all night. 8:30 and the place was packed to the gills with expectant Feat fans as we elbowed our way toward the front to find a good vantage point. As we leaned against a wall stage right, a woman turned to me and offered us their seats when they decided to move closer to the stage. It only got better from there. Even down to Craig Fuller (former Pure Prairie League founder and one-time member of Little Feat) joining them on stage for a goose-bumpy “Amie” and then sticking around for a 10 minute version of “Dixie Chicken” … which is a perfect segue right into my recent column in The WEEKLY: 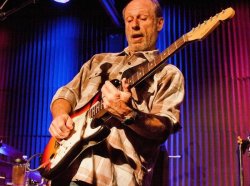 If you’ll be my Dixie Chicken …
by Deborah P. Miller

I’m confessing right here and now that I have my own personal rock anthem.  No, not exactly written for me, though if truth be told, I have inspired a song or two. I’ve actually had several anthems, each a punctuating high note for my life at the time.  My first was Brown Eyed Girl (still applicable today), followed by Steppenwolf’s Born to Be Wild, then The Stones Sweet Virginia, and Springsteen’s Born to Run. But, at the top of the list, pretty much since it came out in 1973, is Little Feat’s Dixie Chicken.  I can’t explain why except to say that the song moves me to get up and move.
Little Feat always felt indefinable. Were they rock? Were they blues? Were they New Orleans funk? How about all the above. They sure can boogie and their energy level on stage is always on the upper range of smokin’.  They are the one band that’s as good live, if not better, than they are on album. No surprise, considering the serious pedigree of the band, various members of which came together by way of Frank Zappa’s Mother’s of Invention.
Back in 1978 when I was living in Atlanta and working for the Warner Bros. Artist Development Director, he got sent in one direction and asked me to go the other direction for a few shows with Little Feat, who were touring in support of Waiting for Columbus. To say I was excited would be an understatement, but to discover that I’d actually be working with them in my own hometown of Chapel Hill was just a really fine bowl of sausage milk gravy. They stayed at the old Holiday Inn on the Boulevard, played Carmichael Auditorium, and when they asked if I could set up a golf game for them, I turned them over to my Dad, who took them out to Finley Golf Course, and even played 18 holes with them.  I ultimately received a gold album for my insignificant role in that tour.  Maybe it IS the little things. Except that little BIG thing got stolen along with my Cars platinum album.
I was just as excited recently for the opportunity to talk with Paul Barrere, guitarist/slide player/lead and background vocalist for Little Feat prior to their upcoming August 4th show at Cat’s Cradle in Carrboro.
When I mentioned that former Chapel Hill visit to Paul, his memory pulled up one nugget.  “Wasn’t that the basketball arena?” he asked.  When I confirmed that it was, he said “I just remember that Dean Smith wasn’t pleased that we were playing on his court. Even though they covered it, he was still worried about the floor.”
Once he and I got past all the reminiscing, the so and so says “hey,” and I’m a friend of “what’s his name,” we got down to the business of talking about what’s new with Little Feat.
Rooster Rag, their 16th album, and the first with new material in almost 7 years, just gets more enjoyable with each listen. I was hooked from the first track, a jumpin’, jivin’Candyman Blues, an old Mississippi John Hurt classic.
Paul was as eager to talk about Little Feat and Rooster Rag as I was and our phone conversation was peppered with lots of teasing and laughter.  Does it get any better than this?
Read my entire Chapel Hill Magazine’s The WEEKLY Q&A with Little Feat’s Paul Barrere online by clicking HERE.
_____________________________________________________________________

We got cowbell!
Finney happened upon Just Drums one day in his travels around his own neighborhood in South Richmond and he couldn’t wait to take me there.  Lordy, Lordy … it was better than shoe shopping. Too easily said by someone who primarily slips her “I’ve Got The Blues For Red” painted toesies into flip flops every day even in the winter, right?

Posted in A-Musings, Food and Wine, Love and Lust, Music (re: the Food of Love)