Good grief, have you ever had a week fly by so fast that you barely had a chance to gracefully segue from one day to the next?  Me neither.  Actually this was one of those weeks, and I shoulda cloned myself so I could do it all as I ended up having to sacrifice a few things.  But maybe I was just resting up for today … it’s Oktoberfest at Saxapahaw!

Had way too much fun on Thursday at WCHL recording two upcoming shows for SideDish.  First up was Sugarland Bakery Czarina Katrina. Ryan, that is, and her new Marketing Coordinator Emily Pierce … and they brought cupcakes!  New flavors!  YUM!  They are going to kill me for not remembering exactly which ones we tasted, but they were unbelievable … Apple Cobbler, Bock Beer, Pumpkin Chocolate Chip, one with bacon, and more. Emily, HELP!  Remind us what you brought.
_______________________________________________________ 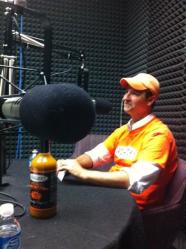 And then along came Mr. Cackalacky, his own damn self … Page Skelton and Greg Hirsh (the new Cackalacky Kid) … pulling a cooler filled with a warm crockpot full of grilled chicken drummies just floating away pretty as you please in a pool of Cackalacky sauce.  He included the recipe which I’ll link here as soon as I’ve made it into a pdf.  I don’t know what I enjoy most … hearing Page tell stories -or- his finger-lickin’ good sauce.  Ok, both equally.

MUSIC ON SHUFFLE:   What was really shuffling was me … and Larry … off to The Cave to fill our ears.  The Cave (or CavernTavern) is unlike anywhere else you might have ever been.  Something like 40 years worth of stories that place could tell if it could talk. Imagine the beginnings and endings, not to mention the middles. We’re here to hear Lynn Blakey, uno Tres Chicas with a silken voice and an acoustic guitar and singer/songwriter Dave Wilson, Chatham County Line.  I love this place.  Just wish they had good wine. Hell, I wish they had wine at all.  Not much of a beer drinker, I asked if they had any Jack Daniels.  Bartender says “No, but we have Jameson.”   I did my best Scooby Doo head tilt  … I spent too many years in Tennessee to be fooled into Irish whiskey.  I’ll leave it to you to imagine what kind of night it was.

FOODIMENTARY:  Today is National Nut Day .. so I’m going to head out and do my part to be one 🙂

This entry was posted in A-Musings, Food and Wine, Music (re: the Food of Love). Bookmark the permalink.