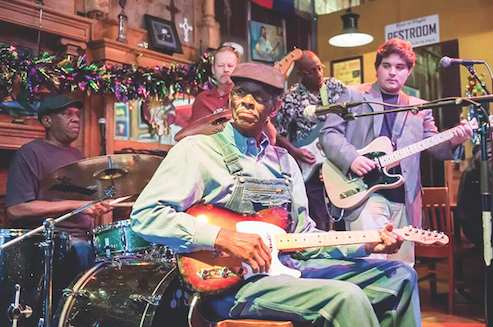 One chilly Sunday afternoon back in February, I sat across from John Dee Holman in the Boom-Boom Room (translated: the back room) at the Blue Note Grill.  He was there to play a little with Tad Walters. I was there to get a story and hear a bit of him and Tad playing the blues. Joan, his long-time girlfriend, and I had already done our hugs and high-fives.  Not a bad way to spend a winter-just-won’t-go-away afternoon.

I teased Holman by admiring his blue-suede-shoe-blue corduroy trousers and asking if was ready to do some buck-dancing.  He hid a cackle behind his gnarled hand at the very idea of a man his age dancing.  “Might need a drink for that,” he said with a hint of mischief, adding “Get Joan to tell you how she ‘usta run a liquor house.”  Drink or not, the man can tell some stories.

Hillsborough-born, now living in Durham, Holman, long considered a Piedmont blues legend has toured both nationally and internationally. His first, and perhaps best album, Bull City After Dark, produced by the National Council for the Traditional Arts was nominated for a WC Handy award. The record is sadly out of print and no longer available, but new local efforts are underway to try to locate the original masters. Holman was the recipient of a 1994 North Carolina Folk Heritage Award.

Talent. Awards. Recognition. You’d think that would have left Holman set for life.  But circumstance and hard times, that what makes the blues, have left him with major struggles that include losing his house. Even he says “ain’t got no head for bidness,” which is why he’s trusted others, many times misplaced. The Triangle Blues Society in conjunction with Papa Mojo’s Roadhouse, the Hayti Heritage Center, the Blue Note Grill, Music Explorium and the Questell Foundation decided to do something to help their blues brother.

“John Dee can drive a rhythm section into the dirt,” said blues-guitarist Charlley Ward. “We can’t let him down.”

The inaugural festival, serving as a tribute fundraiser for the legendary Holman, is also an open membership drive for the Triangle Blues Society, (TBS), a volunteer-run, non-profit dedicated to honoring and keeping traditional and contemporary blues alive in the Triangle. Messenger elaborates, “by joining and supporting the TBS, we continue to play it forward and insure though our work and contributions that this indigenous for of music, the Blues, will be here long after we have moved on.”

Join or renew your TBS membership at the event, and you’ll save $5 on the ticket, plus receive gift cards to Papa Mojo’s Roadhouse, the Blue Note Grill, and a Triangle Blues Society T-Shirt. 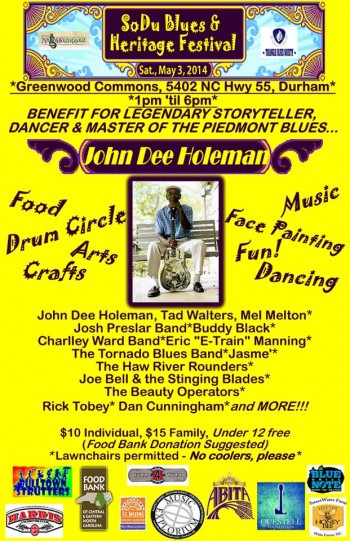 Family friendly activities include food, music, dancing, arts and crafts, and more. Donations for the Food Bank of Central & Eastern NC are encouraged.

But back to that Sunday afternoon in the boom-boom room.  I asked Holman who he had played with that stood out above all the others.  His answer?  “Taj Majal, and that guy sitting right over yonder” pointing straight at Tad Walters.

It’s all about supporting and protecting our cultural assets, one of which is John Dee Holman, co-author of “Chapel Hill Boogie.” 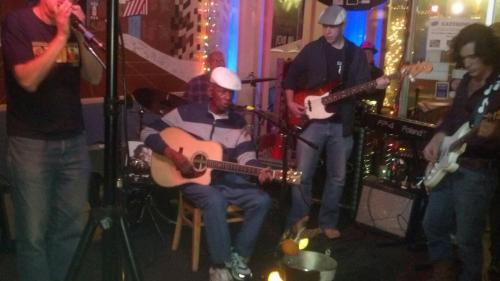 Posted in A-Musings, Music (re: the Food of Love)