King Mackerel and the Blues are Running 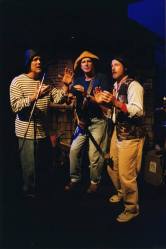 I tried living in the middle of the country. Didn’t work for me. Do you know how long it takes to drive to the coast from Memphis, TN?  Nine long hours. 491 excruciating miles. Today that would equal about 200 songs on your IPod. No amount of Drifters, or The Swinging Medallions, or even Jimmy Buffett can make that drive shorter or the sea closer.  I dreamed endlessly (and likely bored my landlocked friends) of living back in the middle of North Carolina, where in just a little over 2 hours, I could dig my sand-starved toes deep into the foaming surf. And eat seafood to my tummy’s content.

Once I moved back to Chapel Hill in 1998, I near ‘bout burnt the road up between here and the beach. My younger sister, Kate, who somehow ended up in Vermont, and I share the need for warm sun, sand, and sea. On one of our long weekend trips to Beaufort, we wandered into the North Carolina Maritime Museum. Thumbing through CD’s, I laughed as I randomly pulled out “King Mackerel and The Blues Are Running” by the Coastal Cohorts (Don Dixon, Bland Simpson & Jim Wann.)  I mused out loud that I had gone to high school with Bland Simpson, though he was a couple years older than me. The CD came home with me.

With an impressive performance history from its first run at Rhythm Alley in Chapel Hill in 1985 through its most recent at the NC Museum of Natural Sciences in Raleigh in 2012, “King Mackerel and the Blues are Running” has been performed at venues up and down the coastline from Virginia to Georgia. And then there are those other venues like the West Bank Theater (NYC) and the Terrace Theatre at the Kennedy Center (Washington, DC).

Bland was old-classmate good enough to spend a few minutes with me talking about the history of the musical, how their fundraising performances have contributed to the environmental health of our coast, and the two upcoming shows at the historic Playmakers Theatre.

“We’re doing two nights; Friday is sold out, Thursday night has seats available,” said Bland. “It was a fun alliance to make to put it into context to the water in our world.  The history of the show is a very stout-hearted, light-hearted evening.”

The CD went to A rotation on first listen.  It’s one of the playlists I put on when I’m about 50 miles from the shore. It lures me on in to the beach like a rising wave, beckoning me to stay a while.  In fact, I’m listening to it now as I write, wishing that print media had a “push play” button so you could listen in.  If you love the North Carolina beaches, and I know you do, you’ll be instantly smelling salt air. You just might shag dance a little (or a lot.) Slurp an oyster (or two or three.)  Peel some shrimp (a couple or a pound). You might even be singing along as if you’d known the songs forever.  Holler if you want company.

Read the rest of the interview HERE.

Listen to some King Mackerel … go on. You know you want to.

This entry was posted in A-Musings, Music (re: the Food of Love) and tagged Bland Simpson, Deborah Pardee Miller, Don Dixon, Jim Wann, King Mackerel and the Blues are Running. Bookmark the permalink.