THE BLUE NOTE GRILL
First things first.  To Bill, the very handsome and very kind gentleman at the Blue Note Grill last night who gave me his raffle tickets … despite my throwing it out there to the universe to pick one of my numbers, I did not win the guitar 😦  Now I can’t look forward to having you teach me to play, not that you would have been able to, but it sure would have been fun trying.  But I do look forward to coming to watch and listen to you play.  That’s a promise.

But I’m getting ahead of myself … more about The Blue Note Grill later!

TROY MEZZE LOUNGE
The afternoon started at Troy Mezze Lounge at City Market in Raleigh for a tasting of what can only be described as a true Turkish delight!  There was not one bite that wasn’t on its way to being extraordinary.  And I don’t make a statement like that lightly … it was like there was this huge colorful and fragrant party with alot of personalities going on on this Mezze Platter, a sampler of Hummus, Acili Ezme, Haydari, Shakshouka, Lentil patties kofte,  barbunya plaki and Yaprak Dolmasi. Each carefully placed scoop on that platter was a star on its own … with multi-levels of flavors, colors, and textures. You know how sometimes you aren’t paying attention and mix something together to the point that what went into it becomes unidentifiable?  Well, they know how to NOT do that.  Every flavor stands simply and brightly all by itself. Thank you, Arif!  It’s worth the drive to Raleigh. Cross my heart.

PIG WARS AT CITY MARKET
Can you eat fun?  Yes, you can … ‘specially if it’s cooked, chopped and served right away off a smoker just a few yards away.  I take my judging Q seriously and this night was no exception.  Every team offered up admirable and tasty plates of chopped BBQ, but there was one clear winner …. drum roll, please … Big Ed’s! Many thanks for inviting me to be a guest judge along with Charlie Gaddy.

Walking around City Market is a little like stumbling onto a side street somewhere in Europe where you kinda want to just get lost and stay that way in the shops … some exotic and fragrant with incense, others whimsical and artful. 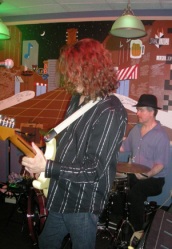 BACK TO THE BLUE NOTE GRILL
TBNG was actually a fall back position last night when four of us could not get into to Papa Mojo’s Roadhouse to see Randall Bramblett.  With a slight disappointment we headed north to The Blue Note and mighty glad we are that we did. New Jersey blues rock guitarist Chaz DePaolo brought it and brought it and brought it!  All night long and then some.

This entry was posted in A-Musings, Food and Wine, Love and Lust, Music (re: the Food of Love). Bookmark the permalink.